Voters in Berlin will have their say on plans to build apartments on part of the vacant grounds of the former Tempelhof airport, the hub of the 1948-49 Berlin Airlift.

The airport in the heart of the German capital was built in the 1920s and closed in 2008. Berliners have embraced the vast empty space of its former runways as a kind of anarchic recreation ground..

Berlin has seen large-scale redevelopment since German reunification in 1990.

According to the latest research by Savills, a shortage of prime central office space has pushed the average prime rent across Germany’s top six markets (Berlin, Cologne, Düsseldorf, Frankfurt, Hamburg and Munich) to €27.70 per sq m, the highest level since 2001. The international real estate advisor finds that, excluding Hamburg, all the other markets recorded rising prime rents over the past twelve months, with Berlin, Cologne, Düsseldorf and Frankfurt recording an increase of more than 5%.

Savills notes that the high average prime rental level was reached despite a decrease in take-up across Germany’s six major office markets, which totaled approximately 2.78 million sq m in 2013, 10% less than in 2012. This resilience in rents is partly a result of a continued below-average completion volume in 2013. In total approximately 860,000 sq m of office space was delivered throughout these six markets in 2013 and, whilst this marks a notable increase on 2012 (at circa 670,000 sq m), it still comes below the five-year average figure of 1 million sq m.

Marcus Mornhart, managing director and head of office agency at Savills Germany, says: “Many potential occupiers are competing on the few available prime developments, which is placing upward pressure on the achievable rents for these properties.”

He adds: “The real message of 2013, however, is that the German office market took another step towards becoming a landlords’ market. In spite of a decrease in take-up the vacancy rate reduced by one percentage point to 8.0% on average across the top six markets and, particularly in central locations, tenants are facing an acute shortage of space. This has resulted in occupiers favouring decisions to renew existing leases.”

Average rents also rose, according to Savills data, particularly towards the end of the year and exceeded 2012 levels by 2.2% but overall the rental rise recorded in the prime sector did not extend to the wider market. Companies looking for office space beyond central locations have more choice with a much greater volume of available supply. Consequently, rents on Germany’s peripheral submarkets decreased in the majority of the cities, stabilising towards the end of the year.

Going forward the firm expects take-up in 2014 to rise boosted by the improved economic dynamics anticipated in Germany and Europe. Particularly major occupiers, who have been reluctant to make relocation decisions in 2013, are set to play a more significant role again this year so that an annual total take-up of at least 2.9 million sq m is realistic. This forecast is in line with the ten-year average.

Matthias Pink, in the research team at Savills Germany, comments: “We believe the period of consolidation in German office markets is complete and expect to see increased take-up figures in 2014. As a result of the improving economic environment, including on the financing side, construction has started on a number of developments. This will boost supply and hence we expect 2014 rental levels will rise moderately at best and vacancy rates will reduce at a slower pace.”

More capital is available for investment in German and European real estate now than even in the boom years of 2006/7, PIE’s German Property Breakfast, hosted by legal practice Mayer Brown, heard in London on Thursday. Capital from Asia and other foreign sources is combining with surging domestic allocations to force down yields for core assets, pushing some buyers into second tier locations and strategies.

CBRE Group, Inc. (CBG: Quote), a commercial real estate services and investment firm, announced Thursday that it has entered into a definitive agreement to acquire VALTEQ Gesellschaft mbH and its units. The terms of the deal were not disclosed.

VALTEQ, founded by its current owners, Thomas Herr, Gabriele Lüft and Jürgen Scheins, is a technical real estate consulting firm in Germany. The firm has offices in Berlin, Stuttgart, Frankfurt, Munich and Nuremberg.

The company expects the acquisition to close before the end of the first quarter, is subject to German regulatory approval.

Upon closing of the acquisition, VALTEQ will become a fully integrated part of CBRE’s Building Consultancy group in Germany and across Europe.

Michael Strong, CBRE’s Executive Chairman of Europe, Middle East and Africa, said, “VALTEQ will give us a new service proposition in Germany that complements our existing offering in that country as well as in our EMEA building consultancy business as a whole.”

Voters in Berlin will have their say on plans to build apartments on part of the vacant grounds of the former Tempelhof airport, the hub of the 1948-49 Berlin Airlift.

The airport in the heart of the German capital was built in the 1920s and closed in 2008. Berliners have embraced the vast empty space of its former runways as a kind of anarchic recreation ground.

Berlin has seen large-scale redevelopment since German reunification in 1990.

A design by Frank Gehry, the architect responsible for the Guggenheim Museum in the Spanish city of Bilbao, will be used for a building on Berlin’s Alexanderplatz that will be Germany’s tallest apartment tower.

The 39-floor property will have a height of 150 meters (490 feet) and contain about 300 apartments, a hotel and a spa, Hines said today in a statement. The Houston-based developer plans to spend as much as 250 million euros ($340 million) on the project, which is due to start in 2015.

“Berlin is becoming more of an international metropolis and this project is a sign of that,” Regula Luescher, Berlin’s Senate building director, said in an interview after a briefing to announce the plan. “This building will be a landmark.”

Alexanderplatz is a square surrounded by Soviet-style office blocks and one of Berlin’s most famous structures, the needle-like Fernsehturm television tower. It’s also the setting for Berlin Alexanderplatz, a 15-hour film by Rainer Werner Fassbinder.

Gehry’s cream-colored, stone-clad building will turn on its axis at the top 12 stories with four connected towers in a design that Luescher and the developer likened to a cloverleaf.

Germany is going through a construction boom as developers take advantage of rising rents and prices, and the government invests in development of affordable homes to meet a housing shortage. About 225,000 homes were built in 2013, the most since 2004, according to data compiled by the ZDB and HDB construction associations.

Story: The Waste and Corruption of Vladimir Putin’s 2014 Winter Olympics

The apartments in the building on Alexanderplatz will probably be sold to private individuals, said Christoph Reschke, Hines’ Germany managing director. Buyers from outside Germany will likely be attracted to the building, said Luescher.

“Berlin is certainly a hotspot for developers right now,” Reschke said in an interview at the event. “There’s a well-functioning German economy and a catch-up effect in housing, so it’s not just German investors but also international investors who are coming to do projects.”

Following unprecedented real estate trends in Germany, the Berlin property market has bagged an incredible reputation as one of the hottest investment opportunities in Europe. In fact, compared to other thriving European markets, Berlin is leading the way and is backed by other German cities such as Munich, which is yet another hot property market today. Over the past 8 years, Berlin has witnessed significant growth in population, flooded with technology entrepreneurs and creative professionals from different corners of the world. Several multinational giants, pharmaceutical, IT, and Blue Chip companies have gained a strong foothold in the city, which has further paved way for millions of people immigrating from across the world. 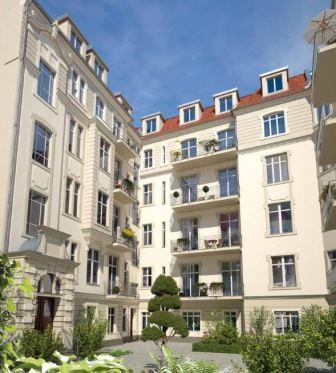 A significant boost in the population has also facilitated the way for innumerable real estate investors to pile up in Berlin. Owing to the rapid infrastructure development, lucrative business and employment opportunities, and tremendous growth over the last few decades, real estate market has hit its peak. Residential property prices have shot up by 17% in the last 12 months and a whopping 31% in the last 5 years, ending July 2013. Today, apartments in Berlin are selling at an average of €2,000 per square meter that is only less than 1/3rd of the existing rate in Paris and less than quarter of price in London.

Why Berlin has Emerged as the Hottest Property Market?

Followed by reunification, Berlin has emerged as a world city. This has paved way for rapid development in infrastructure, education system, business and finance, and real estate. The government promoted construction and renewal of private and social housing with implausible tax benefits and subsidies. The population has been growing rapidly, mostly because young Germans and foreigners have flowed back to the city for study or work. Moreover, there is an ongoing hype about Berlin being a vibrant and trendy city that has further attracted lucrative investment opportunities. Through all these developments, housing and property in Berlin has emerged as a hot market for global real estate investment funds.

Increasing Population – As Berlin has developed as a modern cosmopolitan metropolis, it has become a lucrative destination for study, work, and business. Rapid population influx has led to tremendous growth in demand in the real estate market, particularly for residential properties. Catering to growing demand, real estate developments in Berlin have been remarkable, making its position among the top European property markets today.

Housing in Berlin is Still Cheap – One of the biggest advantages that make Berlin a hottest property market in Europe is that housing in the city is still remarkably cheaper as compared to other cities such as Paris or London. This is attracting real estate investors from across the world, followed by the remarkable development in property market. Despite of comparatively cheaper prices, houses are selling at record prices these days.

Rapid Development and Stable Legal System – This is yet another factor that has been attracting real estate investors from across the world. Rapid development in virtually all sectors such as infrastructure, education, real estate, business, legal, and finance, has made Berlin a lucrative investment market in Europe today.

German offices, shops, warehouses and hotels valued at 30.8 billion euros ($42 billion) changed hands in 2013, the most since 2007, as buyers sought to increase returns amid low interest rates and sellers took advantage of rising prices.

Appetite for commercial deals is supported by a positive economic outlook as German investor confidence surged to the highest level in seven years and manufacturing output expanded to the strongest pace in more than two years, according to data compiled by the Ifo institute.

In any city, immigrant neighborhoods and multicultural pockets can be some of the most interesting places to explore. Here’s a quick tour through some of Berlin’s diverse enclaves and attractions.

Explore Little Istanbul
Berlin is home to the largest Turkish settlement outside of Turkey—about 200,000 people—earning the city the nickname Little Istanbul. Almost a quarter of the city’s Turkish population lives in the neighbouring southeast boroughs of Neukölln and Kreuzberg, which together make up the Turkish Quarter. Every Tuesday and Friday throughout the year, the Turkish Market takes place alongside the canal that marks the border between the two districts, in an up-and-coming area dubbed “Kreuzkölln”. Visitors can pick up a huge range of wares, from fabrics, clothes and household supplies to fresh fish, fruit and vegetables. You can also book guided tours of the Turkish-Islamic Şehitlik Mosque, the most visited mosque in Germany, which also hosts an annual Ramadan festival and the city’s Long Night of Religions, when many churches, synagogues and houses of worship open their doors to the public and host special events and ceremonies. (Read More)