After Lucas von Cranach founded a soccer community app in the city of Bochum, Germany, in 2008, he grew to realize that a move to Berlin was the best way forward for his company, motain GmbH.

“We needed to change the mindset of our company, and bring in international staff, and it is easy to persuade people from around the world to move to Berlin, which is a very young and trendy city, and an inexpensive place to live,” says 35-year-old Mr. von Cranach, who made the move in 2010.

“Today, motain employs 45 staff with fifteen nationalities, including from the U.K., Brazil, Australia, Italy, France, Poland, Romania and Macedonia, and for senior positions above a certain salary level, a work permit can be processed in a couple of months,” he says.

The motain office is in Mitte, the former district of East Berlin where the digital startups are mostly clustered. The nearest U-Bahn station, Rosenthaler Platz, was one of the so called ghost stations that were left unused for 20 years after the Wall divided the city in 1961. After the wall came down, young people moved into Mitte to take advantage of low apartment rents, and this creative community, combined with cheap office space, led to Mitte emerging as the epicentre of the digital startup scene. Central planning and economic stagnation have given way to venture capital and entrepreneurship.

Small- and medium-sized businesses (the Mittelstand) form a strong backbone of Germany’s economy. The country ranked 6th in competitiveness by the World Economic Forum’s 2012-2013 report, and 3rd in its capacity for innovation.

Despite the global success of iconic German brand names such as Siemens, Adidas and Volkswagen, Germany’s corporate sector has a relatively low level of dominance by large corporations compared to other countries, and the government is keen to promote new winners.

“These are the next generation of hidden champions, the foundations of Germany’s and Europe’s future success,” says Juergen Friedrich, CEO of Germany Trade & Invest, the economic development agency of the Federal Republic.

Mr. von Cranach’s motain has recently been enjoying a surge in global interest in the app, which goes under the name iLiga in German speaking countries and THE Football App in other markets, and in April announced an investment of about $13-million from Earlybird Venture Capital.

Earlybird itself moved its entire Hamburg team to Berlin in 2011, in order to be at the centre of things. It also has offices in Munich and Milan.

BERLIN — Vacation homes for sale in the German town of Prora, on the Baltic island of Ruegen, feature private saunas and sea views at a steep discount to similar properties nearby. The catch? They’re part of a dilapidated complex of identical, unadorned blocks built by Adolf Hitler to house 20,000 workers on Nazi party-sponsored vacations.

Developers this spring began marketing apartments in the Colossus of Prora, as it’s known, for as much as 700,000 euros ($900,000) each. They’ve stripped the grimy plaster off facades, smashed through walls to create spaces big enough to appeal to modern tastes, and added balconies, wood floors and glossy kitchens.

“It’s better than letting the whole thing crumble,” Uwe Heuer, a banker from Hamburg, said as he toured a model apartment. “When I’m here I don’t think about the Nazi history.”

Begun in 1936 and abandoned when Germany invaded Poland in 1939, Prora was the largest project of the Nazis’ “Strength Through Joy” organization, created to keep workers busy with patriotic activities in their leisure time. More than twice as long as the Avenue des Champs-Elysees in Paris, the complex consisted of eight buildings with a total of 10,000 rooms.

The design, with its vast swimming pools filled with seawater, a column-lined meeting hall reminiscent of ancient Rome, and a square for parades, won a Grand Prix award at the 1937 Paris World Exposition. (read full article)

The Ifo think tank’s confidence index rose to 105.7 points for May from 104.4 last month. The upturn followed two consecutive declines and beat economists’ expectations of a very slight increase to 104.5.

The German economy returned to modest growth of just 0.1 percent in the first quarter, just enough to avoid a recession after shrinking in the last three months of 2012.

That performance was weighed down by an exceptionally long winter and the country’s central bank said this week that it expects an improvement in the current quarter. Recent industrial orders data also have been promising.

Ifo said this month’s improvement in its survey was fueled by companies’ brighter view of their current situation, while their outlook for the next six months remained unchanged.

Export expectations have weakened somewhat among companies in the key manufacturing sector, but “continued stimulus from abroad is expected,” Ifo said in a statement.

A separate survey showed a significant rise in German consumer confidence as people’s expectations for the economy and for their own income improved.

The GfK institute said its forward-looking consumer climate index rose to 6.5 points for June from 6.2 in May, the highest since September 2007, though it cautioned consumer confidence would be vulnerable if Europe’s debt crisis escalates again.

The Cold War Berlin — with its Western sector enclosed by a concrete wall — may have inspired David Bowie to write his classic Seventies anthem Heroes but it is the new Berlin that is attracting a wave of British buyers seeking a cool place for a second home that will give them maximum value in euro bricks and mortar.

The city’s winters may be cold, with weeks of snow guaranteed, but legendary German efficiency ensures it will never be the “wrong kind” of snow able to disrupt Berlin’s transport system. This is a year-round capital in every sense. The old city, famed for squats and underground culture, is making way for architectural grand projects and designer family quarters.

The once grim thoroughfare Schoenhause Allee, in the former Communist East, is transformed as a nappy valley so popular there are complaints of a gridlock of designer baby buggies. The offshoot Kastanienallee, linking central district Mitte to Prenzlauer Berg, a newly desirable inner suburb, is packed with hip shops. Heimat Berlin is a natty milliner with floor to ceiling headgear. Temporary Showroom is stocked with the cutting edge international capitalist clothing demonised under Communist rule. 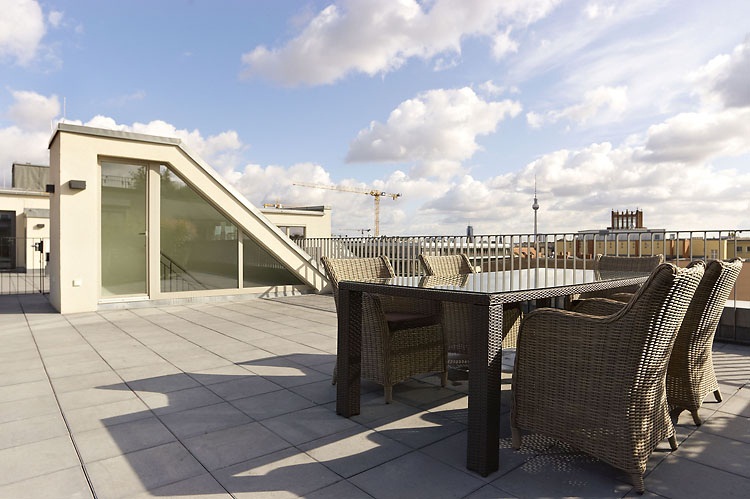 A symbol of the old meeting new, as East met West, is the Neues Museum, which has incorporated demolished elements for its re-opening and is the pinnacle of modern architecture. These days Checkpoint Charlie is “Meet you at the gift shop checkout, Charlie!” as this famously zoned city finds its united capital city identity.

The transformation is drawing the biggest design names. Phillipe Starck is coming in to add cutting-edge design to what was a concrete blockhouse jungle. Tacheles is a glass and steel pyramid development in Mitte with interiors designed by Starck backed by a Swiss developer. A swanky loft, in what was the grim heartland of the former East Germany, is symbolic of the turnaround. From the Stasi stalking the strasse to Louboutins strutting the streets of a city which has grown to about 3.5 million people…..

As thousands of fans queued around the block, with the most diehard sleeping on the pavement for a chance to be the first inside its new store in Berlin, Apple appeared to have lost none of its retail magic at its latest opening yesterday.

“I was here at 9pm last night,” said Jan Teuner, 46, a civil servant. “It was cold and the ground was hard. But I wanted to be first because I love Apple and the products are perfect.”

Opening in a listed building which formerly housed a cinema, the new store is Apple’s biggest outlet in Germany, where it has 10 other shops. The façade of the building on Kurfuerstendamm, Berlin’s main shopping street, is styled like a Greek temple. Inside, iPhones, iPads and MacBooks were on display on tables made of German oak.

The crowd queuing outside was youthful, largely male, and united in its adoration.

“Apple’s prices may be high but they are worth it,” said Adrian Post, 22, a hospital worker who had travelled in from nearby Potsdam. “I’ve just come to look. I’m not going to buy anything today, but I’d like one of those very flat laptops.”

Kim Druschky, 22, who is training to be a childcare worker, said: “I’m here because it’s stylish – and for the T-shirts.” The first 4,500 customers received limited edition T-shirts with the slogan Apple Store Kurfuerstendamm Berlin, handed out by cheering, whooping staff who greeted them at the front of the store.

Until now, Miss Druschky has been ordering online. “I’m glad there’s a shop now – the customer service is better,” she said.

The new Berlin store has opened in a building once occupied by the Filmbuehne Wien – a cinema with a reputation for screening artistically ambitious films. The cinema’s grand interior – chandeliers, moulded ceilings and parquet floors – has been restored, while the screening room has been converted into a theatre which will host talks and concerts.

Latest quarterly results for tablets showed that Apple’s iPad was still in first place, though its market share slipped to 39.6pc while Samsung’s share grew to 17.9pc. The tablet market grew overall by 142.4pc year-on-year, according to market research firm IDC.

In the US, Apple has trademarked the glass storefronts, panelled facades, and the oblong tables and wall-mounted video screens inside its shops. Its new Berlin store has a re-designed ‘Genius Bar’, with experts sitting on stools alongside customers rather than facing them. It also has a dedicated space for business customers, in a high-ceilinged room once occupied by the cinema’s café.