A property developer removed more of the Berlin Wall Wednesday, police said, in a surprise dawn move amid a bitter running protest over the dismantling of the once-detested Cold War division.

Four segments were removed from around 5:00 am local time (0400 GMT) from the Wall’s longest surviving stretch, creating a gap around five metres (16 feet) wide where a gate was installed, a police spokeswoman said.

Some 250 police were at the site, according to media reports.

Opponents have rallied, at times in their thousands, along the 1.3-kilometre (nearly one mile) stretch of Wall, known as the East Side Gallery, since the beginning of March when a first panel was taken away.

US singer and actor David Hasselhoff, who gave a legendary New Year’s Eve performance of his song “Looking for Freedom” at the Wall after its fall in 1989, has even joined protesters.

Since 1990, the outdoor gallery has been covered in brightly coloured graffiti murals, including the famous “Fraternal Kiss” depicting Soviet leader Leonid Brezhnev and East Germany’s Erich Honecker locked in an embrace.

The 3.6-metre high stretch is a tourist magnet and a must-see for history buffs retracing the dark chapter of Berlin’s 28-year-long division who are otherwise hard pressed to find remnants of the Wall to photograph.

Developers have said that plans to provide access to a 63-metre high residential development along the banks of the Spree river as well as access to a planned bridge had required a 22-metre segment of the Wall to be dismantled.

A meeting between the property company and city authorities on Tuesday about possible alternative sites for the project proved fruitless.

Thrown up in 1961, the Wall stretched 155 kilometres (96 miles) and divided Berlin until 1989, but today only around three kilometres of it still stand.

Think of Berlin and you might well conjure up images of fashionable but frayed hostels or hip and arty accommodation that doesn’t exactly scream luxury. However, the arrival of the new Waldorf Astoria is ramping up the comfort factor.

Housed across 32 floors of the Zoofenster skyscraper, the hotel has 232 guest rooms and suites, all featuring panoramic views over the city’s skyline.
Snuggle up in a custom-built bed in front of a 40in TV and wake up with a brew from the in-room Nespresso coffee machine. In the public areas, there’s also Les Solistes, a restaurant by Michelin-starred chef Pierre Gagnaire, the New York-styled Lang Bar, Peacock Alley for afternoon tea, and a Guerlain spa.

‘Berlin is now the third most visi-ted city in Europe,’ says the hotel’s general manager, Friedrich Niemann. ‘It has developed enormously in the past five or six years and is undergoing a real process of urban renewal but has few luxury hotels as yet.’ He believes The Waldorf Astoria will offer travellers a new level of sophistication and elegance.

Within walking distance of many of Berlin’s attractions, including the church Kaiser Wilhelm Memorial Church and the main shopping street Kurfürstendamm, the hotel is well placed for discovering the historic city on foot.

Artistic sorts can soak up the vibe in the Romanisches Café – renowned as a meeting place for literati, local artists and musicians – on the ground floor of the hotel, a stone’s throw from where it was first located around 100 years ago. (Source)

Is that the express train to Pankow? Australian photographer Kate Seabrook took pictures of every single station in Berlin’s vast underground train network for a new art project. Matthew Luxmoore hopped on a train to speak with her.

More than 500 million passengers pass through the 173 stations of Berlin’s U-Bahn metro each year. Opened in 1902, it is the most extensive underground system in Germany. When connections were severed along the East-West city border in the 1960s, many stations ended up visually reflecting the areas they served.

With this in mind, Australian photographer Kate Seabrook took up the challenge of compiling a photo collection of the entire network. Starting in February 2012, she travelled the lines with a camera, getting off at each station to capture the scene before the next train arrived.

“I normally took three to 15 photos to get the shot, needing around two minutes. The challenge was getting usable shots in the window of time between one train and the next without disturbing passengers going about daily business,” she told The Local.

Despite initial concerns from husband Simon, who accompanied her on every trip, Kate said she experienced no trouble.

“A couple of people requested directions, a drunk guy asked me to take photos of him… Security questioned me once. They asked what I’m doing and I just said ‘I’m taking photos of the architecture, I find it interesting’. They left me alone.”

The seed, Seabrook revealed, was planted during a Paris holiday some years ago, when a tourist snap of Abbesses metro station drew her to minimalist architecture.

Impressed with Berlin’s underground upon arriving in 2011, she saw the challenge of documenting it as a way to familiarize herself with her new urban surroundings.

“Berliners don’t fully appreciate their daily commute. I wanted to show them how amazing the U-Bahn is,” she said. “I researched the idea beforehand as I wanted to be sure no-one had done it before.”

She discovered there was a “Miss U-Bahn” pageant with the outfits of contestants matching various stations and a book containing photographic highlights of the network.

Yet a photo collection picturing each line from end to end was something she did not come across.

“As far as I know, no one has documented it in this manner,” she said.

One striking pattern she noticed in the process was the way a station’s appearance matched that of the local area.

“Occasionally stations reflect their surroundings. The station Rohrdamm (Rohr means ‘pipe’) has a design which makes clear it’s an industrial area. Heidelberger Platz, located in affluent Wilmersdorf and adorned with cathedral-like Gothic arches, is another example.”

The contrast between what was once West and East Berlin is also noticeable in places.

“On the whole, stations in the former East are more functional and simpler in appearance. Wealthier areas seem to have gone to greater lengths designing and preserving existing stations,” Seabrook said.

Before arriving in Germany, Seabrook worked for a photography business in Melbourne. She and her husband fancied the challenge of a new culture and had been considering a move to Europe for some years.

Berlin seemed to offer the right balance. “We wanted a bit of a culture shock, but not too much,” she said.

Knowledge of German is nevertheless a vital attribute, Seabrook said: “I think it’s difficult to get work here if you don’t speak the language.”

Asked about future plans for the project, Seabrook said she hoped to turn the series into a book.

“It’s important the photos stay as a set and a book would certainly make that possible,” she said.

The attention the project has attracted inspired her to repeat the feat in other European cities, with the Nuremberg U-Bahn, Germany’s newest, and Prague metro currently topping her list. She has no plans to cover Berlin’s commuter rail system, the S-Bahn.

“People ask if I’ll shoot the S-Bahn but it’s not a manageable, contained project. Lines are long and station architecture becomes very uniform in the outskirts,” Seabrook said.

As someone better placed than most to comment on the famed efficiency of German transport, she admitted to being impressed.

“Ninety percent of the time trains turned up on the dot. Once I foolishly decided to shoot on a Sunday, however, which happened to fall after the coldest night of the year. It was minus 15 and the line had a significant portion above ground. The ten-minute wait felt like an hour!”

Her favourite station? She had to settle for two: Pankstraße, with its instantly recognizable “Octopus” font, and Konstanzer Straße, whose walls are streaked with a blinding blend of orange, yellow and black.

Sections of the Berlin Wall are being removed to make way for property development on prime real estate near the Spree river. 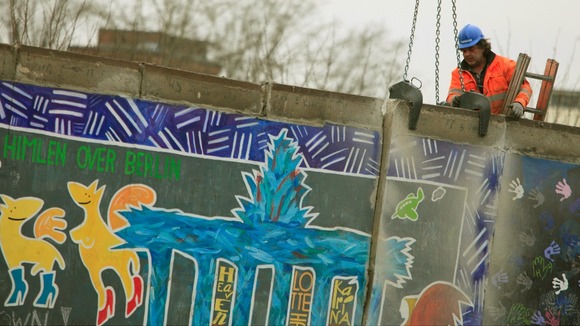 Much of the artwork was added after the fall of communism as artists from around the world came to depict their visions of freedom.

Does Silvio Berlusconi have a Berlin property portfolio?  I have no evidence to suggest that he does but it’s my only explanation for his otherwise madcap attempt to be Italy’s prime minister for a fourth time.

Let me explain.  Since the start of the Euro crisis Berlin property has boomed.  Southern European investors have been emptying their savings accounts in Milan, Athens and Seville to buy apartments in Mitte, Kreuzberg and Schmargendorf.  Why this sudden Mediterranean enthusiasm to own a Hauptstadt bolthole?  Because of the fear of the collapse of the Euro.

If the Euro breaks up – and I am not suggesting that it will – then the relative value of the ‘southern Euro’ will plummet while the ‘northern Euro’ soars.  Foreign investors in German property will do very nicely, thanks very much.  And once the dust settles they’ll be able to trade in their Prenzlauer Berg bedsit for a penthouse in Kolonaki or overlooking the Spanish Steps.

The influx of non-resident buyers – both foreign and German – has fuelled the property boom, changing the city’s culture of ownership.  According to the BZ, the average Berlin rent increased by 50% in 2011.  Many long-term tenants in Neukölln and Kreuzberg now find that they can no longer afford their apartments.  More and more of the small, local specialist shops which help to make this city special are closing their doors.  There are other factors of course, not least Berlin’s divided history and its restoration as Germany’s capital, but – as in London – property price inflation seems to be due to foreign money.

So it’s not for political reasons alone that Chancellor Merkel is determined to save the Euro.  If the monetary union breaks up and the value of the ‘northern Euro’ swells, the cost of German exports will increase, damaging its economy.  At the same time foreign investors will cash in on the currency differential, selling their property portfolios and sending prices on a downward spiral.  That currency differential, combined with years of austerity and hard-won efficiencies, might even make Italy, Spain and Greece more competitive, enticing manufacturers to shift production south to the now-sunny Mediterranean.

Where does Berlusconi fit in to this scenario?  Although he staged an impressive comeback in the election and can claim to have saved himself and his closest allies from implosion, as Alexander Privitera points out in his astute essay for the American Institute for Contemporary German Studies, the end of the era of a party built around the cult of the Berlusconi personality has been merely postponed.  There is little lost love between Berlusconi and Chancellor Merkel (his alleged September 2011 insult must be one of the least subtle in modern politics).  Now that Il ‘bunga-bunga’ Cavaliere knows his days are numbered, what better way to bid farewell to her than to run for office, to prolong Italy’s economic instability and to profit from destabilising one part or other of the German economy — whether he owns properties in Berlin or not?