Earlybird Venture Capital is shifting the focus of its operation to Berlin, the company said.

The company only announced its Berlin office in March, but Ciaran O’Leary, who despite his name is actually German, said the company would be moving here before the year’s end. “As soon as we realized that things are changing, we said we are moving 80% of our staff to Berlin,” he said. “Not in the next two-three years, but in the next two-three months.”

The move is a bold statement by the 14-year-old venture capital firm, which operates from offices in Hamburg and Munich. According to Jason D. Whitmire, general partner at Earlybird, there would be “consolidation” elsewhere.

“People are late, but I bet that before the year is out, there will be one or two other top VCs here,” said Mr. O’Leary.(more)

“My friends think I am a total freak,” said Christina Franz, as she washed down her full English with a mug of milky tea on Tuesday. “They cannot understand why I like British food so much – Sunday roasts, scones and clotted cream, cooked breakfasts of course.” Even white sliced bread, she added cheerfully, to the visible disgust of her boyfriend, Kai.

The 33-year-old German was delighted when she heard that a cafe serving British cuisine had opened up in Berlin in May. She had been suffering withdrawal symptoms following a two-year spell in the UK when East London – subtitled God Save Brit Food – started serving scotch eggs, bacon and egg butties and steak and ale pies in the trendy Kreuzberg district. (more) 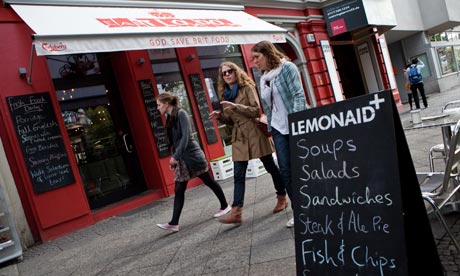 (RTTNews) – Germany’s central bank forecasts robust economic expansion in the third quarter. However, the medium-term outlook worsened more than originally estimated due to heightened uncertainty, Bundesbank said in its monthly report on Monday.

Private consumption should increase noticeably in the current quarter after a significant fall in the previous quarter, the bank added. It expects strong retail sales as well as improvement in car sales to underpin the third quarter growth.

The economy expanded merely by 0.1 percent in the second quarter. The German Institute for Economic Research, or DIW, projects the largest Eurozone economy to grow 0.4 percent in the third quarter.

German Finance Minister Wolfgang Schaeuble told the Bundestag this month that the German economy is likely to expand around 3 percent in 2011.

For years, backpackers and pleasure-seekers have been flocking to Berlin for its industrial music, underground art scene and generally edgy vibe. But assume that Berlin is all warehouse raves and graffiti art, and you will miss its best bits. After all, Berlin already had one luxurious heyday in the 1920s: a time when jazz greats came to see and be seen in smoky velvet lounges, when hotels housed a cast of international characters and crystal-chandeliered theaters invented a saucier form of cabaret. Berlin was the Roaring Twenties. (more)

(Reuters) – German chemicals trade group VCI said it still expected the nation’s chemicals businesses to see revenues increase by 10 percent in 2011 but warned that risks to growth were mounting.

“Even though signs are increasing that the global economy is cooling, 2011 will be a good year for the German chemicals industry,” said VCI chairman Klaus Engel.

“Growth will be clearly weaker in the second half, which we have been anticipating for quite a while now,” he added.

The group also reiterated its previous outlook for industry output volume to rise 5 percent this year.(more)